So long #EGU2013 and thanks for all the science

Posted by Will Morgan

I spent the last week at the European Geosciences Union (EGU) General Assembly in Vienna hearing about some of the latest research findings in this broad field of science. I thought I would put together a collection of random thoughts on the meeting below. 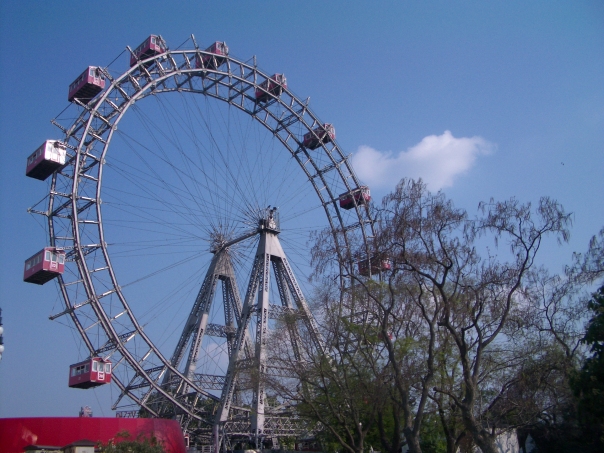 The Riesenrad, my favourite spot in Vienna (aside from the conference centre of course). I actually took this photo at the 2009 meeting – I do recall the weather being somewhat better that year.

One of the great strengths and weaknesses of a conference as large as the EGU, where over 10000 scientists attend, is the substantial breadth and depth of the science on offer. Between the parallel talks and poster sessions, there is a vast amount of interesting research being presented. This is supplemented by various discussion forums, courses and debates.

As researchers we tend to increasingly narrow our focus down to the incredible minutiae within our field so it is nice to broaden things out. I find that it is a great way to generate some new ideas for my own work. It also provides context for how your small slice of the atmospheric pie fits into the whole Earth system. It isn’t for everyone and I also find conferences with a much narrower subject area worthwhile but it is worth bearing in mind if you’ve not been to many conferences before.

As far as the actual science was concerned, the two major sessions that I found the most engaging were the sessions on pollution in ‘Megacities’ and the ‘Fire in the Earth System’ session.

Some of the figures in the Megacities session were incredible; our ability to inject vast quantities of pollution into the environments where around 50% of us live would be impressive were it not for the harm it causes. The health and environmental consequences of this pollution are potentially vast, especially as cities across the globe increasingly expand and people fill them.

The session on fires was especially helpful as it demonstrated the elements of this major issue that we do not currently understand and set some of the context for my current research, which I presented in the session. The talks in the session spanned several continents (Antarctica was the only continent not represented) which is appropriate given that the smoke from these fires can be transported across huge distances, yielding an impact on the global scale.

One of the most impressive features of the EGU this year was the prevalence of social media usage. I felt this added an extra dimension to the experience and allowed me to ‘follow’ other aspects of the conference easily. With so many sessions occurring at once, you almost always have to make a choice over which talk to go to. Often this leaves you feeling that you might have missed out.

However, via Twitter, I was often able to tune into the headline conclusions and figures from other sessions. In particular, Sam Illingworth and the Air Quality Group at the University of Leicester kept me up to date with other atmospheric pollution sessions that I wasn’t able to attend.

Social media usage wasn’t just solely limited to following session highlights though. Several discussions broke out online, which added a unique element to the conference for me. While Twitter was certainly a facet of the AGU meeting I attended in December, it was more passive in nature than the EGU.

Most importantly, social media served as a way of meeting some excellent scientists and great people!

To sum up, I really enjoyed EGU 2013! I’ve got a few ideas for some blog posts inspired by some of the awesome science at the meeting, which I’ll hopefully write in the coming weeks.

I gave some additional reflections on the meeting on the Barometer Podcast audio diary.

I am a researcher studying the impact of air pollution in the atmosphere on climate. I am a member of The Barometer Podcast team.
View all posts by Will Morgan »